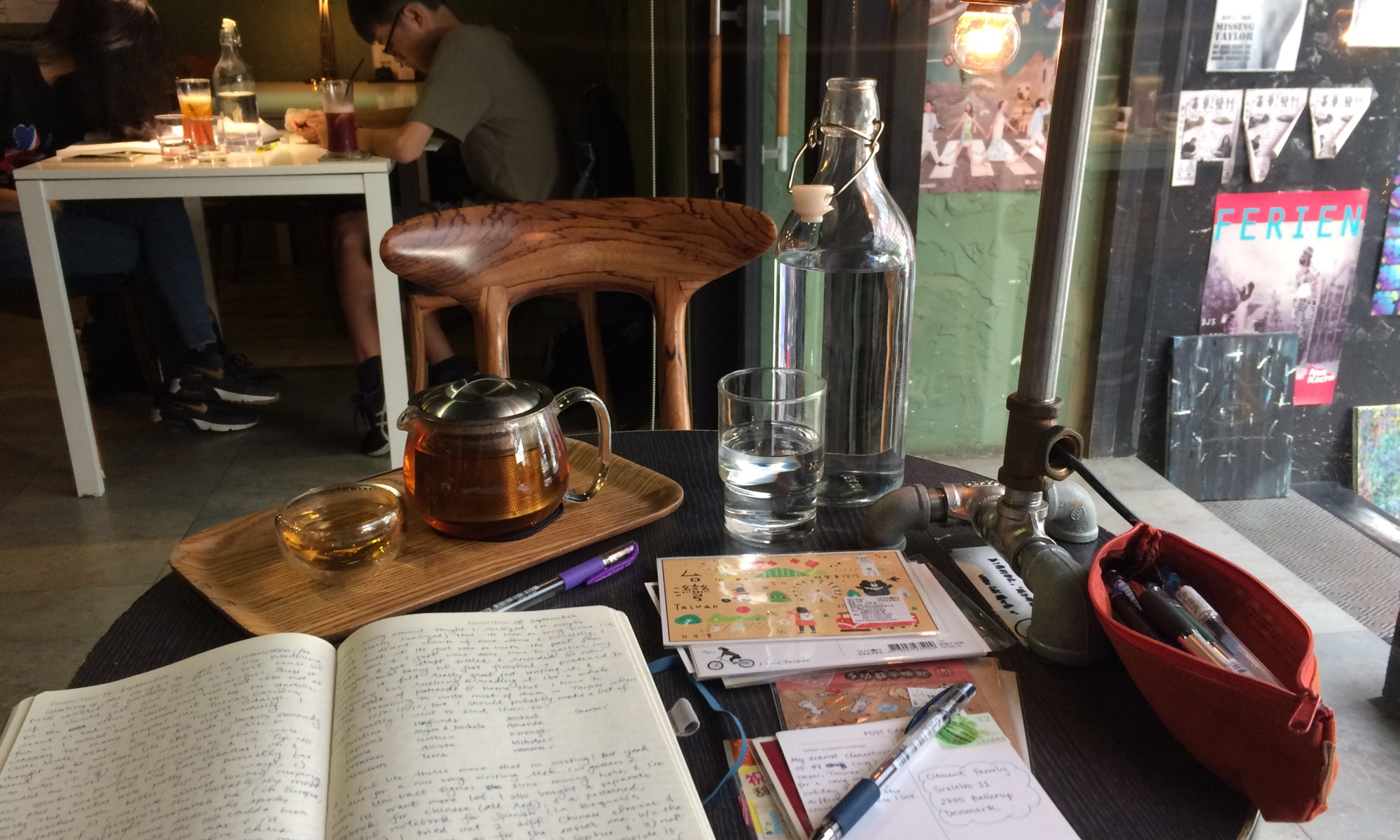 September somehow stealthily snuck by, and now we’re almost done with October already. It feels very fast due to the fact that we’ve had a strange schedule of work days and holidays the past few weeks to accommodate the Mid-Autumn Festival and Taiwan’s National 10/10 Day–which has given us copious amounts of time to travel and explore. On the day of Mid-Autumn Festival, a few of us took a day trip to a river north of the city, which turned out to be well worth the half an hour scooter ride. We found a startlingly refreshing river that happily bubbled along rocks and small pools. Some Taitung University students gifted us an already peeled (!) pomelo–a true sign of goodwill and kindness. I’m still not over how kind Taiwanese people are! It was a really good afternoon. 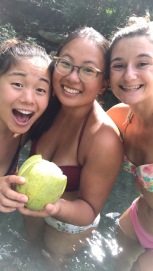 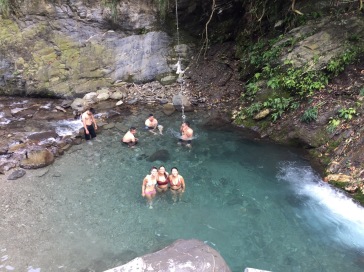 Shortly after our river day, we went up to Taipei again for the four day long weekend, which celebrated the 10/10 Independence Day, which in 1912 was the day of the rebellion that brought down the last dynasty–Qing dynasty–and established the Republic of China. It was our second time in Taipei since August, so we had a bit more freedom to meander around the city for a relaxed but still busy weekend. Some food highlights of the trip included cheap, amazing Thai food at a hole in the wall restaurant in the Ximen Red House district, (extremely expensive but) delicious smoked salmon eggs Benedict for brunch one morning, and of course, the classic Dongmen scallion pancakes. The big travel highlight was our journey to Maokong Mountain, which is known for its views and teahouses. To get to the top, we took a cable car–my favorite! Because it was a holiday weekend, it was a bit packed, but we only had to wait an hour in line. It was an absolutely ~20 minute cable car ride through the lush green mountains, and we could see Taipei 101 peeking out from the city through our windows. It was fantastic. Once we arrived in Maokong Station, we wandered around a bit before settling at a Chinese/Japanese restaurant with a great view of the mountains and city for an absolutely amazing lunch and iced tea. To top off the experience, we saw a huge (I learned later, double) rainbow stretching from one side of the mountain to the other while queueing for the cable car down. It was perfect.

I came back to Taitung just in time for the huge fireworks show, which lasted 40 minutes and featured smiley face and “OK” fireworks. It was hands down the best fireworks show I’ve seen in my life. 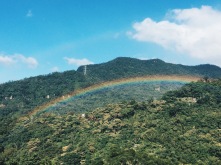 Double rainbow across the sky!

Wild boar with basil + eggplant with basil, the perfect lunch! 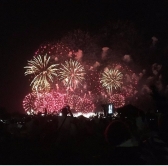 Scene from the fireworks show

Now on to more recent happenings! It was our good friend Caroline’s birthday this past Friday, and we celebrated with a surprise chocolate cake and a pasta dinner. It was an early night, though–she and our friend Nicole had a forty-mile bike ride planned for the next morning to Donghe! I wanted to join, but my weekend was already booked because I had a friend from the US visiting Taiwan!

My good friend Michael from Boston (and who I met through HI Boston, the [only, it seems] hostel in Boston) is visiting Taiwan for a few weeks and he’s spending a good chunk of his time at a surf city north of Taitung called Dulan. I’d heard of Dulan before as a hangout for hippies and expats, and it’d been discussed with a rather negative connotation, so I hadn’t gone before. I was forced to go, however, to send Michael to his hostel from the Taitung train station. I scootered us over in the early evening, just following coastal Highway 11 all the way up north. It was dark already, but we could see how huge the waves were–eerie! We found the hostel–Tangerine House Hostel–just in time for dinner. In classic Taiwanese fashion, the hostel workers also welcomed me to dinner, even though I wasn’t staying the night. I agreed, obviously, and got to know the other two guests staying there–Jason, a Taiwanese student studying in Kaohsiung, and Remi a French traveler wandering around Asia. Our after dinner activity was trying to play darts, ha! 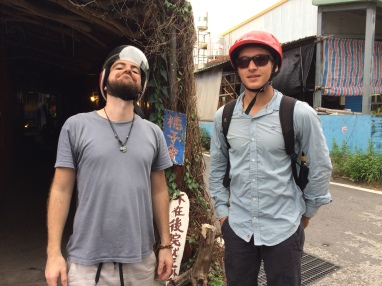 Delicious dinner of loofah, pigs blood and tofu, pigs ears, and some of the best chicken I’ve ever had

We (rather, Michael) somehow found our way to a house party down close to the beach, where travelers from another hostel and expats in Dulan were hanging out, complete with BBQ, beer, and marshmallows. I met people from Taiwan, Slovenia, England, Holland, and more all, in the same place, and we talked about everything from people’s dreams to open up their own hostel to the tricky questions and barriers regarding international development. The host, an older Swiss man who owned a kitesurfing company in the area, was so gracious. People came around with platters of roast meat and encouraged us to eat, even though they had no idea who we were. Everyone had fascinating stories and backgrounds, and I absolutely loved it. It was here that something crystallized for me–I’ve really missed hanging out with travelers. In Boston, volunteering at HI Boston gave me the chance to “travel” within my city via meeting people from all over the world. And in Dulan, I think found this environment too 🙂

The next day was very busy but extremely fun! Michael and I were joined by the French traveler, Remi, and made our way down the coast, making stops at the abandoned beach hotel and a few nice viewpoints. We grabbed lunch, walked around the Artist Village area downtown, and discussed future hostel design ideas and our travels, laughing and joking the whole time. In the mid afternoon we then we decided to scooter to Zhiben to find some hot springs to soak in. Several weeks ago a few other ETAs and I unsuccessfully tried to find an outdoors hot springs in Zhiben and had to settle for one of hot springs inside the fancy Hotel Chihpen. I returned here yesterday to ask where we could find a public one, since the ones inside were separated male/female. Taiwanese kindness and helpfulness pulled through again, and the security guard directed me to a place down the road. I only had to ask one (!) more kind cashier at the 7/11 for directions before finding it, and I am so glad we made the trek from the city–the hot springs was AMAZING. It was called 東遊季, and it seemed more of a waterpark/DIY spa than your conventional hot spring. There were several sections with pools of different temperatures, massaging jet streams, and even healing properties. We had a great time soaking here wearing the ever-fashionable Lycra swim cap, and left feeling absolutely relaxed and refreshed. 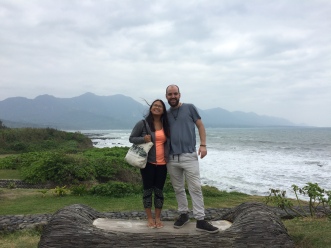 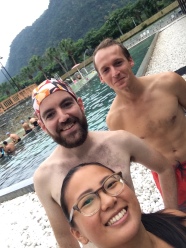 Even though we’d basically just been laying in various pools of water for two hours, we were ravenous. So for dinner, we went to the large Sunday evening night market downtown, which for some reason is nearly triple the size of the weekend night market. We wandered around to take in the sites and sampled a bunch of night market delicacies, and we also had a great conversation talking about Taiwan, traveling Taiwan, and traveling in general. It was perfect.

These experiences have helped me get through a bit of a rough patch these past few weeks. We’ve been here nearly three months now, and it’s dawning on me how long we’ve been here, how so much has happened since, and how much longer we have to go. It’s fall in Boston right now, and I’m seeing pictures of friends apple and pumpkin picking, bundling up in scarves, and walking around the city that used to be my home. I think it’s a bit of homesickness, as well as something I call it the Routine Rut, where things have finally settled down into a (mostly) predictable schedule here. Each weekday consists of waking up early, scootering to school, teaching through the day, working out/going to the stationery store/running errands/finding other things to do before going to bed. Rinse and repeat. I’m glad I had a year of work experience before coming here so I know what to expect and have a better understanding of how I should organize my time. Taitung’s not a big city and I find myself sometimes restless during the weekdays, so I’m trying to find more hobbies and things to do to fill my time. I miss being able to take the bus/shuttle into Boston after work and randomly window shop and meander around. My eye is on the yoga studio here downtown. Another thing that helps is planning travel on the weekends. My next destination is Hualien city, which is a 1.5 train ride north and home to Taroko Gorge, a well-known national park. Besides the beautiful sites, I’m also looking forward to the trip because we’ll be staying at a hostel! Hopefully we’ll meet some other really cool travelers as well.

The next thing I’m looking forward to is having my good friend Sharon visit Taipei next month! Her visit coincides perfectly with a Friday evening dinner we’re having with the Taiwanese ambassador in Taipei, so it worked out great. For western New Year’s, my South Korea ETA friend is coming to visit as well! What with all these old friends and all the potential new friends I’ll make in Dulan (hopefully), I’m starting this week on a high note.